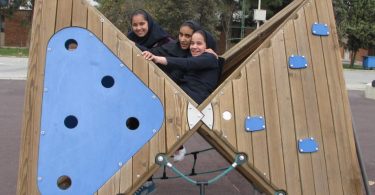 The school was closed due to air pollution. We went to school since the principal, Mr. Musavi, had requested that we work on finalizing the students’ documents. It was the first hour of work and only a few of our colleagues were there. Mojgan arrived later as she was feeling unwell due to an allergy. After a few minutes, Ms. Hasani and Mojgan went to take care of an important task in the language class. Soon, Bahar also volunteered to assist them since the task at hand was difficult. Ms. Hasani returned to the library, and after a couple of minutes Mojgan returned looking distressed. You could tell from her face that something was up. I was worried and asked her but she didn’t say a thing. But then after insisting and seeing our worried faces, she finally pulled herself together and said ‘Morsel drowned!’ I thought that my ears had misheard her. So I asked again ‘What happened? Morsel?’ Mojgan explained that yes, it was Morsel Kazemi who was our student, and who was Shobeir’s sister and was newly engaged. She and her family, along with her partner’s family who had recently came from Kabul, and her aunt’s family all wanted to go to Europe. Their boat broke up in the sea somewhere between Turkey and Greece. Morsel, and three of her aunt’s children fell out and drowned before the eyes of their families. Her mom was hospitalized in Turkey. None of us could speak a word. I couldn’t hear or see anything as if the visual and audio inputs of my brain were disconnected. Everything went blank in my head and there was only the innocent face of Morsel. I couldn’t believe it, it was like wanting to install a program on the computer, and it freezes, so you can’t.

Bahar and Parisa entered the library and understood that Mojgan’s sensitive soul couldn’t cope with this tragic event and so we had heard what had happened. Bahar told us that ‘Our family was doing Nazr (which involves cooking food for poor people) when Morsel came to our home; her engagement clothes were in the suitcase at my house and she told me that her brother, Shobeir, would come to fetch them after they had arrived’.

Bahar continued ‘Since hearing this terrible news, my whole body has frozen and the cold has penetrated my bones; even now my body hasn’t warmed up’. She would burst into tears every time she remembered her. Mojgan said ‘I wish I hadn’t shouted at her when she wouldn’t study’. But I was still shocked and couldn’t believe it. Morsel; a sixteen-year-old girl, average height and slim, olive skin, black eyebrows, and big innocent eyes. She always wore an elegant and amiable smile for her friends and teachers. She would say ‘I know that you rage at me to be better at my studies, I promise I’m going to study harder’. She had recently become engaged to the son of a relative who was studying at the University of Kabul. I wasn’t teaching the girls’ shift at this time, but she was my student when I taught the summer term.

One day I saw her in the school office and realized her face had changed, so I asked and found out that she had become engaged. I smiled and congratulated her. She lowered her head out of embarrassment, smiled, and blushed so much that she couldn’t reply. So her sister said ‘Thanks Ms. Mohammadi’. I complimented the changes in her eyebrows and face. She told me that she wanted to come back to school and I said ‘You shouldn’t have changed your face this much. Now all the other girls will want to style their eyebrows like yours. What are we to do then?’ I asked her a little about her husband and asked her if she loves him. She laughed. You could tell from the laughter that she was happy. I said ‘Good on you, I wish you a happy life together’.

On that day I never knew that I would hear about her death. I didn’t know that she would pack all her belongings and hopes and dreams to leave everything and go. Go and take the hopes of her life, her youth, her marriage, her life with her husband and family and children, to the bottom of the sea. I didn’t know that her husband would have to take her wedding bouquet to her grave. I didn’t know that instead of her future home, she would rest in a cemetery. The following day, all the other colleagues got the news. Fereshteh, who was her assistant principal last year, couldn’t hold her tears back and said ‘Today is her burial day’. Bahar was saying that she saw her suitcase when her sister came to get them. We couldn’t stop crying. At that same moment, I found a letter that Morsel had given me.

I like you a lot. I really like the way you speak but when you are angry and shout, it scares me. Try not to shout. I will always love you. You’re such a kind and tender teacher. You always talk to us in the classroom and try to be polite and treat everyone well.

Seeing that letter made Bahar cry even harder. I said ‘A piece of paper lasts longer than a person’. A couple of days later, I finally accepted that she was gone! For the whole day, I could not stop my tears. At home, I was asked why I was crying; I just could not talk and would burst into tears every time I tried to explain. My brother returned home from university and asked about my distressed state, I choked up with sorrow as I tried to answer. My dad said ‘Go and put on the tea, I will tell him what happened’. I thought to myself; God knows how scared she must have been, how hard she must have screamed and asked for help while floundering in the water. Why isn’t there room for Afghans in such a big world? Their condition in Afghanistan is extremely difficult, their problems in Iran are numerous, and when they try to find a better life outside of these two countries, this is what’s waiting for them. They’re never safe from danger; they can never be in peace. I only know about Morsel but there were thousands of people who lost their lives in even more tragic ways and all their hope and dreams were lost with them. Their families will always mourn their deaths. 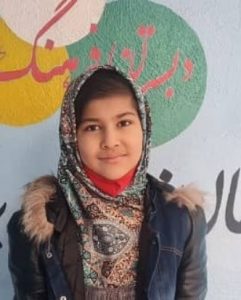 Yaghout
Yaghout- Written by Nader Musavi- 9 July 2021 I went to school around noon to get the seal; I had to stamp a letter. When I entered the office room,... 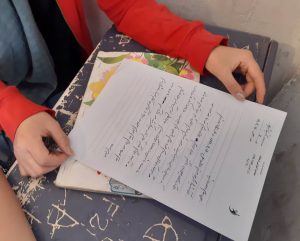 The wish list
The wish list- Written by Mojgan Nazari (Executive Deputy Of Farhang School) 17 April 2021 Today I was looking for a movie which was recorded during the registration days. I... 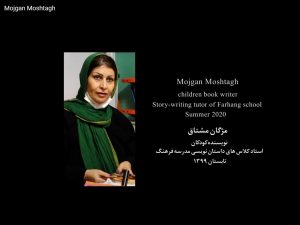