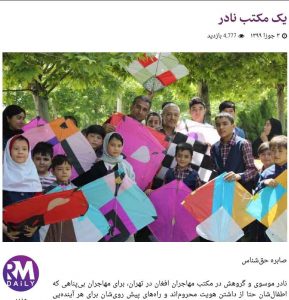 Nader Musavi and his group initiated a club in Tehran for Afghani migrants. The club’s main concern initially was to provide a brighter future for Afghan migrants and their kids in Iran, including the ones without any sort of identification who seemed to have a dark and obscure path in front of them.  They started a club that was more than a gathering, it was an educational and cultural community. They didn’t only take the kids from the street to educate them but also established a magazine which was the cultural link between unprivileged Afghani kids and the rest of the society. This was the starting point for the kids to learn how to write down their dreams and work towards them.  The most crucial asset that any helpless migrant owns is a dream; and the first thing a migrant loses is also a dream. A man with no dream is empty, is suspended, and lonely.  That’s why I honor Mr. Musavi and his colleagues for their great work and creativity. They allowed migrant kids to dream and believe that their dreams can come true.  Musavi and his cultural club inspire kids to write. He would arrange time from well-known authors to meet with kids and then publishes their good essays in kid’s magazines.  Kid’s literature in Afghanistan is rooted in similar types of clubs as well. That’s why Musavi’s club is known internationally. It connects migrant students to each other and attracts both Afghani and Iranian elites all over the world.  This connectivity has resulted in the kid’s well being in many ways. Today, kids in Musavi’s migrant club are not some stray kids wandering around aimlessly, but each one of them is a precious gem somewhere in the world. Some of them are now artists and some are popular authors, and they are all improving day after day.  It seems like this community is a one-way road, with only an entrance but no exits! Because Musavi practices love and love never ends. Nader Musavi is legendary because of his remarkable work. He held on to his club, published magazines, promoted books, trained teachers and facilitators, ran exhibitions and conferences, and did many other works throughout years just to keep love and dream alive among migrant kids.