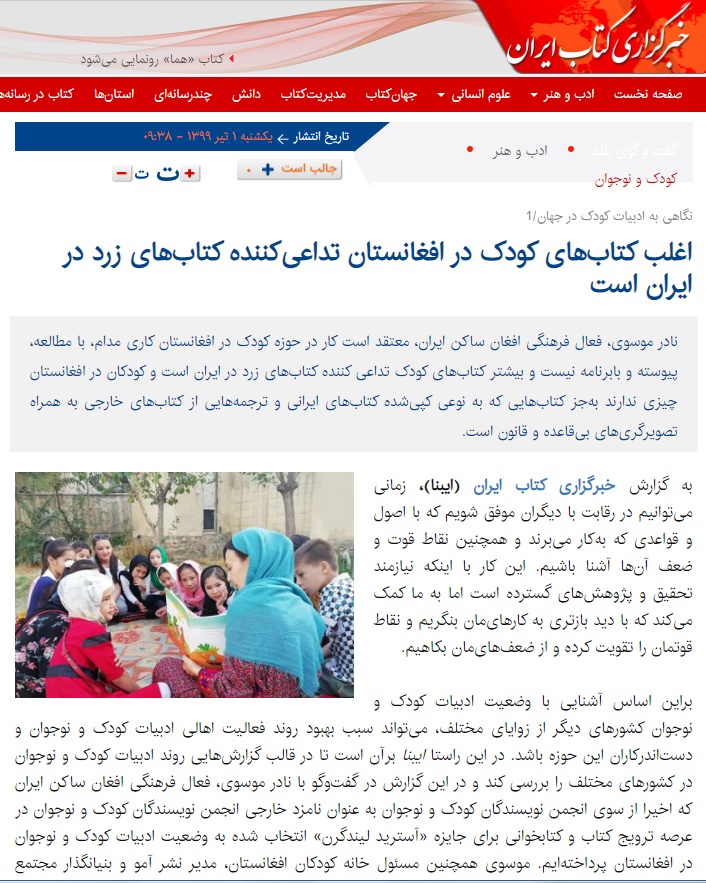 Most children’s books in Afghanistan are reminiscent of yellow books in Iran.

According to the Iran Book News Agency (IBNA), We can succeed in competing with others when we are familiar with their routine principles and rules, as well as their strengths and weaknesses. This requires extensive research, but it helps us to look at ourselves with a clearer vision and strengthen our strengths and reduce our weaknesses.

Mr. Musavi has been recently nominated to receive the Astrid Lindgren Award by the Association of Children and Adolescent Writers as a foreign candidate in the field of book and book reading promotion. Mr. Mousavi is also director of the Khaneh-e Kudakan Afghanistan (Home of Afghan Children) , the director of the Amu Publications, the founder of the Farhang Cultural and Educational institute, the editor of the Kudakan-e Aftab (the Children of Sun)Monthly magazine. More than 50 books has been published in his publications, 8 of those titles are for children.

How much do publications and authors pay attention to this? Unfortunately, publications and authors do not pay enough attention to this issue, and usually some books are published that do not have the required literary frameworks according to international standards. And it’s usually done by publishers and authors who do not specialize in children’s literature and just impliment single projects. That means, when a budget is allocated to this work, they start some projects and publish a number of books in which the contents and illustrations have no specific rules and principles. Unlike experts in the Center of Intellectual Development of Children and Adoltscent or the Children’s Book Council, who are specilized in this field, most authors working in the field of children’s literature in Afghanistan do not have a specialty in it, and do not study or work consistently in this field. Accordingly, there are no specialist authors in the field of children and adolescents. Most of the people are working in this field are poets and authors in the field of adulthood, who have sometimes written books for children, as well as publications. Most of the literary books offered for children are books that do not meet the criteria of children’s literature and are the same yellow books that we see in Iran and are not very noticeable. Recently, two publications have got started in Afghanistan, one is the Kudakaneh (for children) publication, managed by Mr. Mohammad Khavari, which their works are often imitations of Iranian books and mostly works in the field of student’s book. Mr. Asad Ehtesham has been running a group in Mazar-e-Sharif for about four years publishing five books so far. Mr. Ehtesham is one of the few people who has a bachelor’s degree in children’s literature field and works to promote book reading.

What is the place of children’s literature among the audiences? When there are no appropriate books and there is no long-term planning to improve the quality of books for children and teenagers, it can not attract the audiences. When I talk to children coming to Iran from Afghanistan, most of them had not read appropriate poetry and story books for their age. I haven’t seen any proper book for children or books that conform to the international standard. For example, Kudakaneh (for children) publication, or the Gahvareh (cradles) athenaeum published some books for children, but they had no principles or specific planning for their works, just publishing a number of books. The Save Children athenaeum collected and published a collection of poems and stories in the field of children, which was a better effort than the others. In the field of children’s literature, only when an amount of money or budgets are allocated, some authors implement projects and these activities end with the completion of the budget. In Afghanistan, the activities in the field of children’s literature is not continuous, well studied, constant and programmed. Fortunately, it has improved somewhat recently, but that is not enough. In fact, children’s books in Afghanistan are either imitations of Iranian books or translations of foreign books with inappropriate illustrations. Most children’s books in Afghanistan remind me the yellow books in Iran. On the other hand, not many people can afford to buy children’s books Because majority of people are in poor financial conditions so books are usually sold at the cheapest prices or even for free. However, in recent years, some private kindergartens and primary schools have bought these books, yet without any planning or considering the educational and psychological needs of the students.

So Afghan children and teenagers are not very familiar with the authors and the books that are published for them? Yes, they are not familiar with them. Because there are no writers for children and teenagers, and there are works authored about 10 years ago that are still being republished and they are not very proportionate for the children’s needs. For example, authors who their main career is in another field but sometimes they write a story or a poem for children and There is no constant program or activity to introduce children’s authors and poets to children.

How is the translation status compared to authorship? Translation works are more common than compilations. There are almost no authorships in the field of children’s stories, only a few number of poetry books are published haphazardly. Most of the books are translations from European children’s books, mostly done by immigrants who have lived there. That are not compatible with the characteristics of Afghan society and the wishes and needs of its children. For example the Cradle has published a book which is more of a patchwork of writings without any fit and harmony.

Can you name some of the most famous authors in this field? Gholam-Haidar Yeganeh, Hassan Tabaf Norouzi, Mohammad Kazem Mohaghi, Mohammad Hossein Mohammadi, Sarvar Rajaei, Tawfiq, Parvin Pajhwok, Parisa Nazari, & some others can be mentioned as the best authors in this field, but still the lack of professional children’s authors is noticeable. What are some internationally well known children’s books in Afghanistan? The same thing has not happened yet & also there is no experts to review published books.

How well do you think the ministry of education cares about children’s literature? Education ministers in Afghanistan are usually busy with political issues and they are usually content to provide the minimum educational facilities for children and do not pay much attention to this issue.

How is the quality of school textbooks in Afghanistan? School textbooks are also kind of imitations of Iran school books. For example, a poem by Abbas Yamini-Sharif was used in Afghan schoolbooks entitled “We are smiling flowers / we are the children of Iran” which has been changed to “We are smiling flowers / we are the children of Afghanistan”, using the same illustrations only the children faces were changed a little. On the other hand, school textbooks, must be written by professional authors and poets who specialize in children’s literature. Unfortunately, school textbooks are written by the ones who just have the illusion of knowledge and awareness & only dictate a series of certain issues to students. A few days ago, I read an article about school textbooks in Afghanistan explaining that the books are full of mistakes and gross errors, imitations of Iranian school books and in some cases incompatible with the age and understanding of the students. For example, in the religious books for third grade of elementary school, some philosophical religious contents are discussed which is higher than the understanding of students at those ages. Although in the recent decades efforts have been made to enhance the quality of school books with more colorful illustrations, there is still a far distance from international standards. The absence of experts such as Ali Asghar Seyedabadi, Mostafa Rahmandoust, Assadollah Shabani, Marjan Fooladvand, Hoda Haddadi, Farhad Hassanzadeh, etc. is noticeable in this field. Neither in the ministry of education nor in the book markets there are no authors or illustrators who have a background in children literature studies, or know categories & aspects of this issue.

What are active non governmental organizations in this field and how long have they been established? The Khaneh kudakan Afghanistan ( the Home of Afghan Children) is one of these NGOs established in Iran, also the The Kaleme (the word) athenaeum in Qom. There was also another athenaeum working in Mashhad for a while. The Gahvareh (cradle) and the Save Children are also athenaeums servicing in Afghanistan. There are no institutions like the Society of Children’s Book Writers and Illustrators, the Children’s Book Council, and the Center of Intellectual Development of Children and Adolescents because of the narrow budgets & low incomes. Unfortunately these activities are not continuous and effective enough. Sometimes activities are started but not continued, such as Saber Hosseini Afghan cultural activist who was distributing books among children in different cities of Afghanistan using his bicycle until he emigrated abroad. How do you assess the impact of Iranian children’s literature on children’s literature in Afghanistan? Afghan children’s literature is heavily influenced by Iranian children’s literature especially in recent years because a lot of books are taken to Afghanistan from Iran. The books which are mostly considered as yellow press, not appropriate literature works approved by the Center of Intellectual Development of Children and Adolescents. In fact, majority of books are imitations of Iranian children’s books. Even among educational student workbooks, many books from Iran are republished in Dari dialect with changing some words. Even for illustration and painting, many publications attempt to imitate Iranian illustrations. What other countries have influenced children’s literature in Afghanistan besides Iran? Totally in addition to Iran, Afghanistan literature is influenced by Pakistan too. But more specifically, children’s literature is more influenced by Iran, especially about the religious contents, because in Shia areas, religious poetry is more common.

What is the status of publications and critiques in the field of children’s literature? We can almost say that it is zero. For example, the Kudakan-e Aftab (children of Sun) magazine, which we were publishing, was dissolved due to lack of budget. When no one cares or investigates about children’s literature, no critiques are written.

How do you evaluate the book distribution system and the status of children’s bookshops in Afghanistan? Recently some publications have developed their career in Herat, Kabul and Mazar-e-Sharif. However, their activities are more of a business approach, due to demands from some kindergartens, private schools and parents who are searching book shelves for appropriate books for their children. But in general, we do not have specialized children’s bookshops or libraries, because children’s literature is overshadowed by adult literature.