Experiences of reading promotion in Canada and Afghanistan were discussed 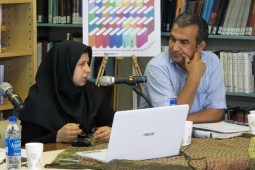 According to Ibna (Book News Agency), 63th meeting about encouraging people to read was held with the participation of Mrs. Bahareh Behdad and Mr. Nader Mousavi in Kanoon Reference Library and both lecturers discussed this cultural phenomena using illustrations such as photos and slides as well as statistical data. Mrs. Behdad having a Ph.D. in children’s literature and nine years’ experience in Kanoon Reference Library started her speech by presenting statistical data about geographical positions and population of Canada and stated that educational methods vary in different provinces and each province has the right to establish its own rules. Her illustrations were about encouraging the public to read. There were photos distribution of free newspapers in kiosks or subway stations. Also, there exist some domestic libraries in every neighborhoods where people can borrow books from. He also stated that what mentioned is just a portion of actions taken for encouraging people to read.

Behdad continued the meeting by analyzing children’s and young adults’ libraries in British Colombia using two examples: “There exists a section in North Vancouver City Library designed only for children and young adults’ books. Before having an analysis of this library it’s worth mentioning that just producing and publishing books isn’t enough. Many factors make a person interested in reading and prioritizing it. City architecture is an important factor regarding reading; a mother living in Iran who has to carry her baby’s carriage has no choice but to own a personal car. However, sidewalks don’t slope onto the intersections and there are places available in buses for wheelchairs or carriage, in Canada. Moreover, Canadian libraries are located downtown and it’s easy to reach there using public transportation. Also, there are benches located in the outdoor area of the library and the outside surface is smooth enough to allow skating. Therefore, the presence of benches and a place to skate help to popularize the library.”

Behdad who is an expert in writing children’s books continued by introducing the section in North Vancouver City Library specialized for children and stated that: “the facilities in this section comprise appropriate environment, fine coloring, nice decoration, enough ventilation and a section for compact discs and computers as well as feeding room and drinking fountains.” She also mentioned activities done in this library: “one of the most noticeable activities is storytelling for all ages at certain times. Storytelling is provided for babies and children aging between 0-6 years old.  This is actually what doesn’t exist in Iran and is nice to be considered.” Behdad continued: “This library co-operates with schools during summer and organizes programs about reading and some people are chosen as reading assistances. The service of the library is also remarkable. The books can be automatically borrowed by members, members can borrow ten books for three weeks (the time can later be extended), and they can return books any time during 24 hours and can also participate in different classes provided by the library.” She then presented educational system, activities and reading methods of this country in detail: “school textbooks aren’t published annually; they are lent to students when school starts. Also, there exist no textbooks for language learning. Children should develop their language skills by studying various books of their own. Reading also doesn’t take place merely at the desks and it can be done with the help of an assistance. Group reading, silent reading, reading while sitting on the couch or on the carpet are some of the other activities done there.” She then talked about teachers’ actions taken in terms of reading and stated: “some of the ways teachers use in Canada are planning personalized reading schedules for students according to their level, providing students with books of special levels, buying students’ favorite books and utilizing storytelling to share personal experiences.”

She also added: “I suggest schools should have better plans and take more effective actions to encourage students to read. As stated, Kanoon can educate children below the age of six by trying to make its libraries more appropriate. If this happens, we can look forward to great phenomena.

Mr.Nader Musavi, chief editor of “Sunshine Children” monthly magazine and founder of “Afghanistan Children’s Home” discussed the approaches towards reading in Kabul, Herat and Mazari-e-Sharif. He considered “book” as what differentiates these two countries from one another and stated that “one utilizes books and is among the first world countries while the other lacks the provision of books and is considered a third world country.”

He emphasized the issue of reading in Afghanistan: “Actually it’s difficult to talk about reading in Afghanistan. As you know in order for children to be encouraged to read, appropriate books in the field of children and young adults’ must be available to them. The neglect of this area of literature has led to negative results we witness now. Although other areas of literature has progressed, the lack of progress in the field of children and young adults’ has greatly harmed other fields such as illustration, theater, puppetry, etc.” He also mentioned that: “There has been an increase in the number of students in Afghanistan but there hasn’t been any progression in the quality of textbooks and so on which alerts a national disaster. Textbooks are soul of a nation while Afghan students are deprived of textbooks even until the middle of the semester. Therefore, other books can’t be discussed while there are huge obstacles in the provision of textbooks yet.”

Musavi who is also the founder of “Farhang” institute for immigrant Afghans stated that:” a magazine called “Siraj al-Atfal” (children’s lamp) used to be published in Afghanistan while these days there is no magazine being published for children. However, “Sunshine Children” which is a publication for immigrant Afghan children in Iran is sometimes distributed in Afghanistan, too.” He continued: “there isn’t any library for children in Mazar-e-Sharif; there is a small room in the Public City Library where children’s books of 1350s can be found there, though. Although Mazar-e-Sharif is rich in literally works, only a few scattered children’s books can be found. These books are supported by foreign sponsors and are considered poor in terms of translation and publication. Libraries are also absent in schools. No library can be found and there is a strong resistance towards Iranian books.” Musavi also talked about economy of children’s literature: “Iranian authors are aware of financial benefits in the field of children’s literature. They know their books will be distributed after being published and families pay for them. However, the conditions vary in Afghanistan. Free books are distributed and no support is gained from UNICEF. The presence of more severe problems requiring support from UNICEF is why this agency can’t support publications.” He then talked about bookstores in the three major cities of Afghanistan by mentioning some examples regarding “reading”.

He mentioned “Koudakaned” publication under the management of Mohammad Reza Khavari in Kabul as an example of children’s literature and added: “some books of “Kanoon” and “Madreseh” publications can be found in bookstores of Afghanistan. Musavi also mentioned two schools: “Towhid” and “Afarinesh”. The managers of these schools are trying to take small cultural actions among students by encouraging them to read.

EXPERIENCES OF READING PROMOTION IN CANADA AND AFGHANISTAN WERE DISCUSSED