First person on the left! 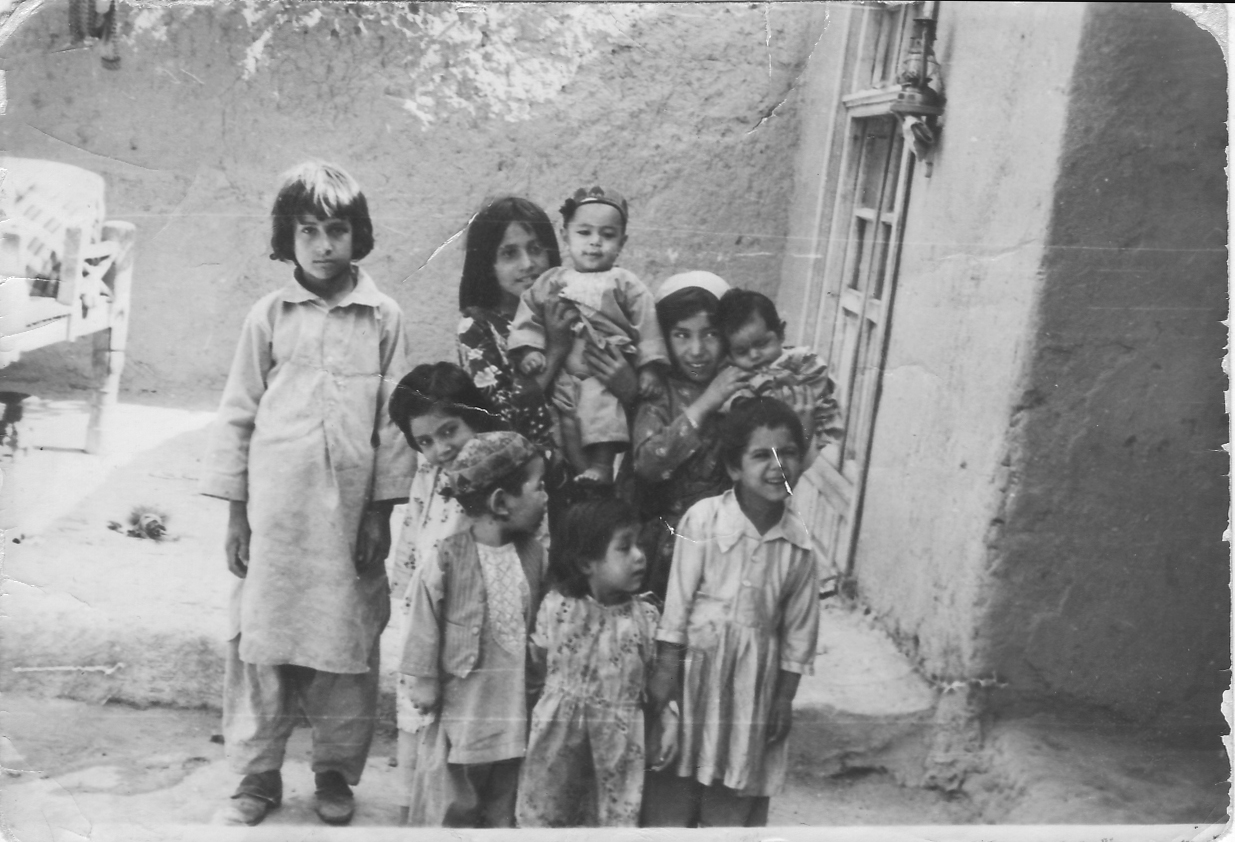 This picture is from about 38 years ago. Maybe in the summer of 1983, on a hot day when I went to fetch water, I went to my grandfather’s uncle-Sayed Safdar’s house whom I used to play with his grandchildren, Nazar Mohammad- Sayed Sarvar’s son and Kazem-Sayed Ali’s son. We were the same age and were schoolmates. The water of the well in our house was a little salty and it was hard to drink, but the water in Sayed Safdar’s well, which was known as Haji Baba among us, was very sweet and fresh. My mother, brother and sisters had all gone to Iran and my half-sister and I stayed with my grandfather.

They kept me to fetch water and graze our cows and sheep and donkeys in spring and summer and feed them and clean the corral and stable in autumn and winter and they kept my sister to bake bread in the oven and cook and nurse from My grandmother. That day I’d gone to fetch water. I had two small metal buckets with a rake that I put on my shoulder and filled two buckets and hung on it. I had just learned to fetch water with a rake. Most of the time, by the time I got home, half of the water was spilled in the alley, and each time my grandfather cursed me that I was clumsy. For me, however, fetching water with all the hardships and curses was one of the most enjoyable things because I was alone at home.

Other times, I was scared of my grandfather so I could not leave the house except with the excuse of fetching water, when I went to Haji Baba’s house and played with Kazem, Nazar Mohammad and his other grandchildren for an hour, and if it was mulberry season, we would go to the Shirtut tree that had very tasty and sweet berries. However, I was very scared of their dog and always before going to their house, I would call from a distance until someone came and avoided the dog or said that the dog was tied up and I could safely enter their house. I remember once, thinking that their dog was tied up, I went near the waterhole and bent down when Nazar Mohammad’s mother, who was called by her oldest son’s name as Ali Mohammad’s mom, shouted that Run, Nader! The dog is not tied up, here it comes to you.

I was very scared of their dogs, I dropped the buckets and ran away, and after running a few steps, I took off my shoes and ran towards our house at full pace screaming and without looking back until I was sure it was no longer following me. Their dogs were terrifying and cruel that if they caught any stranger, they would bite and tear him down. I remember when I was much younger, Haji Baba’s dog had bitten my older sister’s leg, which its scar is still on her feet. I am still afraid of dogs due to those memories. I had gone to fetch water that day. I had just filled the buckets of water and I wanted to get back when Sayed Ali’s brother in law named Shah Agha, who was a well-dressed and handsome young man, came to me with a camera and said: “Nader! stand up so I could take a photo of you.”

I want to send this photo to Iran, your parents may see it. I was very sad, I missed my mother, as well as my sister whom her wedding took place some time ago so I stood there to take this photo. Later, when I came to Iran, I heard that my friend Nazar Mohammad had been killed by the Taliban and Shah Agha had also been killed by someone. In those days, my grandmother was sick and always asleep due to a deep wound on her leg, and my grandfather, who was involved in his daily activities. I had no one to have my hair cut so my hair was gradually becoming long like Egyptian. However, as long as my sister was there she could hardly hold me to cut my hair or force me to take a bath. I always ran away from them when they wanted to cut my nails and hair or take a bath!

Today, I was looking for a photo among my old photos for the iREAD Prize nomination by the Children’s Book Council this year when my eyes fell on this photo, the only photo of my childhood in Ali Chupan village of Mazar-e-Sharif. The old memories of those hard days came to life for me. Especially these days, it is both the beginning of summer and the whisper of the Taliban coming again to Mazar-e-Sharif and our village, Ali Chupan, and terror and panic are everywhere..

P.S.
Sayl kardan: Looking
Hawli: Large yard
Ila: free
Ila gasht: loafer
Nim Khayide: Half chewed, half bitten
Nana, Agha: Mother, Father. Grandmother and grandfather. we used to call our mother “Nanay” and our father “Aghay.”! And when my father beat us or we were afraid of something, we would shout: oh nanay jan.
Ravan kardan: send
Jaan shostan: to take a bath
I am the first person on the left.