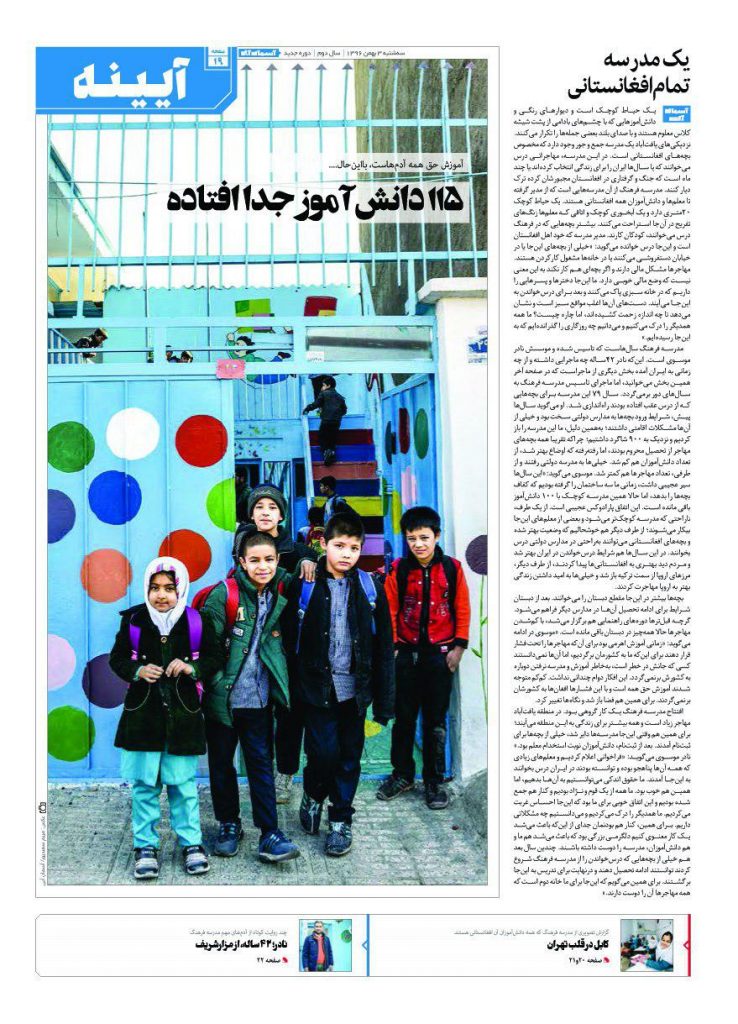 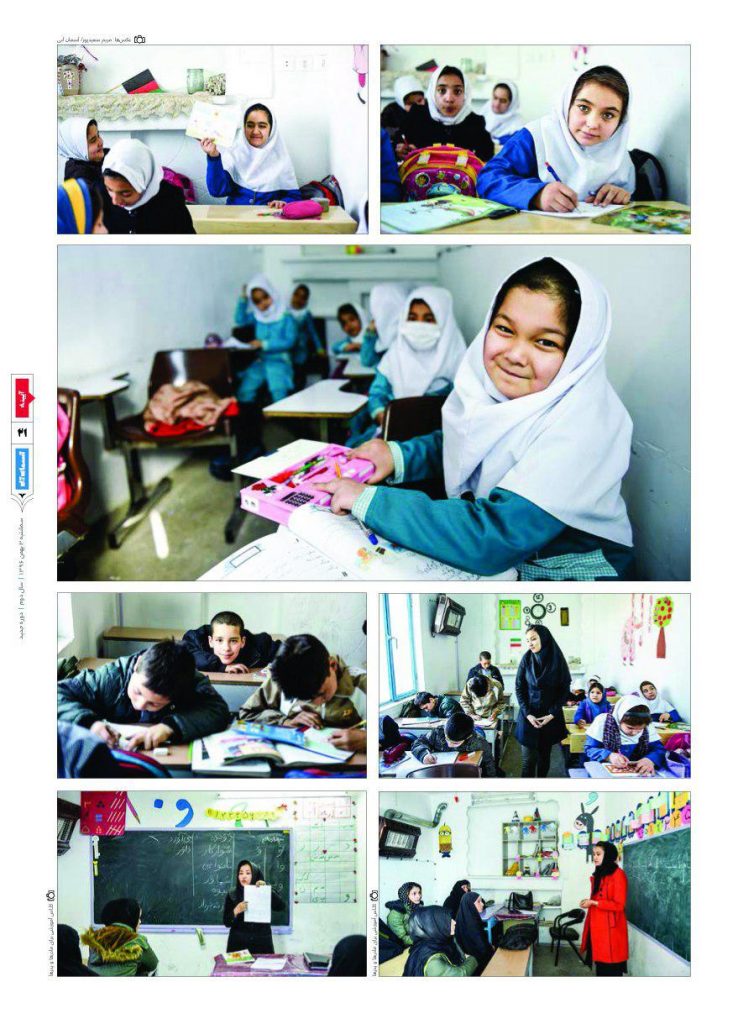 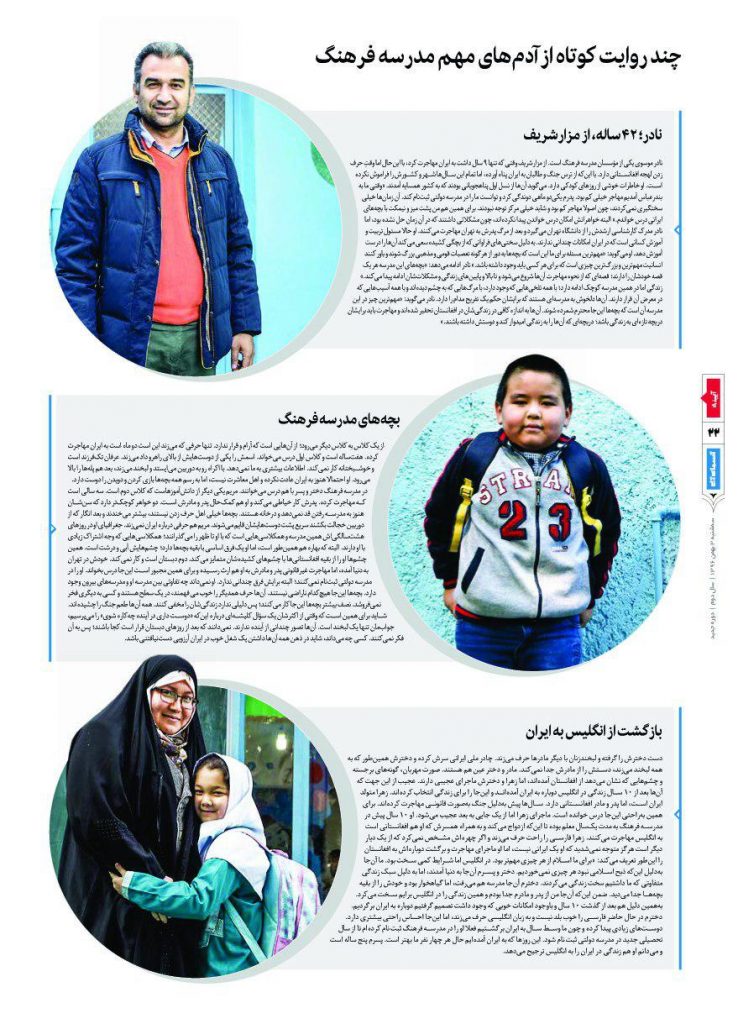 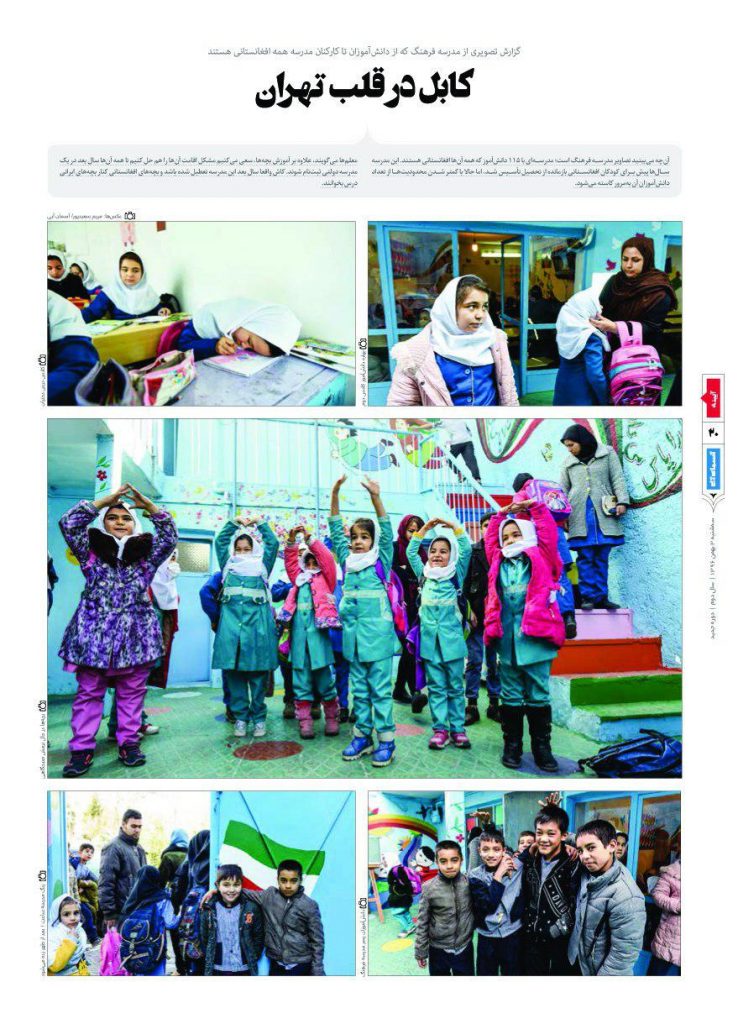 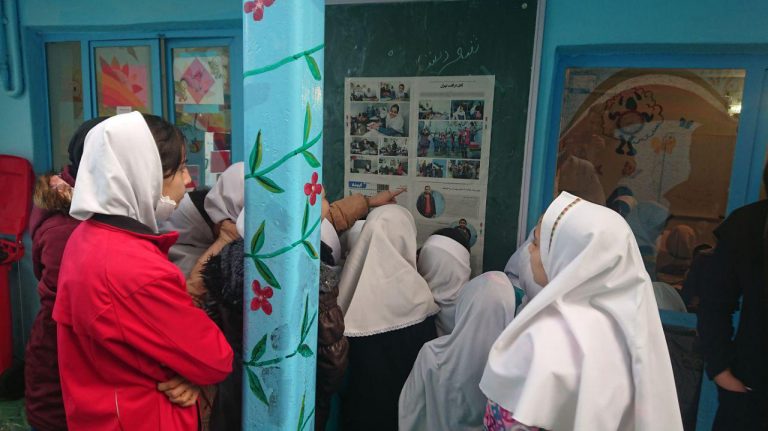 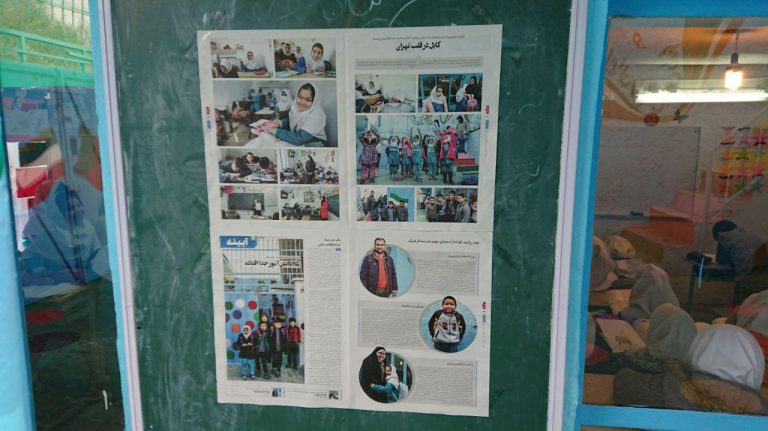 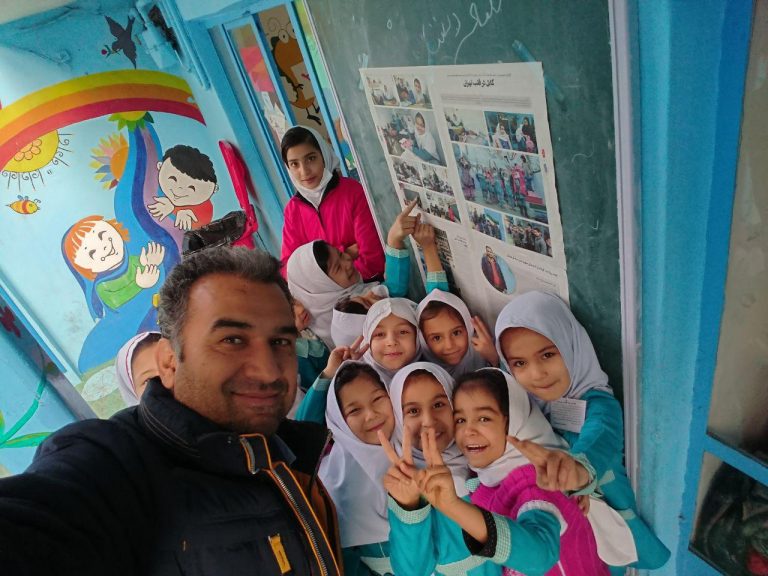 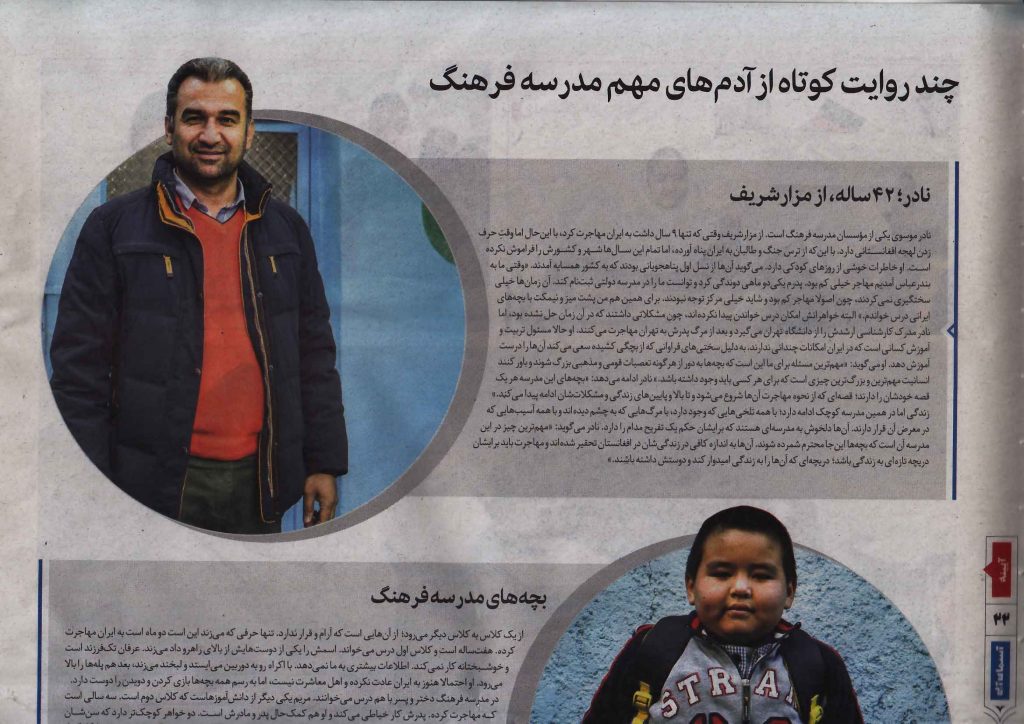 Kabul in the heart of Tehran
A News report about Farhang School, where all of the members are Afghan from students to staff.
What you see in the pictures is Farhang school. A school with 115 students who are all Afghan. It was established for Afghan students who were deprived of education but now when limitations have decreased their population is decreasing too. Teachers say, “In addition to educating the children, we try to solve their residential issues so that all of them can enrol in a governmental school in the next year. I wish this school would be closed next year and Afghan children could study beside Iranian children.”

An all-Afghan school
It is a small courtyard with colourful walls and almond-eyed students behind the window are repeating sentences aloud. Near Yaft Abad, there is a small school for Afghan children. In this school, there are immigrants who have either chosen to live in Iran for years or have been forced to leave their homeland due to the war and conflict in Afghanistan for several months. Farhang school is one of those schools which is all-Afghan. from the principal to the teachers and students. It has a small yard of 30 meters and a small place for drinking water and a room where teachers rest in break times. Most of the children in Farhang school are labour children and the school principal, who is himself from Afghanistan and had studied in Iran says that many of the children here are either hawkers or workers. All the Immigrants have financial problems, and if a child does not work, This does not mean that they have none. We have boys and girls here who clean vegetables at home and then come here to study. Their hands are often green and it shows how hard they have worked and we know what hard days we have passed to get here.

Farhang school was established years ago. and the founder is Nader Mousavi. What happened to 42-year-old Nader and when he came to Iran is another part of the story which you can read on the last page of this chapter. But the story of establishing this school goes back to the year-2000. This school was established for children who were deprived of education. He says that years ago it was difficult for Afghan children to enter governmental schools and many of them had residential issues so we established this school. We had about 900 students because almost all the immigrant children were deprived of education, but gradually the situation improved and the number of students decreased. Many went to governmental schools and on the other hand the number of immigrants has also decreased. Mousavi says that it has been a strange journey through the years, once we had to rent three buildings to support the population, but now this small school with 100 students remains. This is a strange paradox. On the one hand, it is sad that the school is getting smaller and some of the teachers here are getting to be unemployed. On the other hand, we are happy that the situation has improved and Afghan children can easily study in governmental schools. In these years, the conditions in Iran have improved and people have a better outlook about Afghans. On the other hand, the borders of Europe were opened by Turkey and many people migrated to Europe hopeful for a better life.

Children mostly attend elementary school here. After that, conditions are provided for them to continue their education in other schools, although in the past, junior-high school was also held but now with decreasing the immigrant population all that’s left is elementary school. He continues: “education was once a lever to put immigrants under pressure to return to their country, but they did not know that someone who is in danger would not return to his country because of studying. Little by little, they realized that education is everyone’s right and with this pressure, Afghans will not return to their country, so the atmosphere and the view changed.”

The opening of the school was teamwork. There are many immigrants in the Yaft Abad area and more people come to this area to live, so when the school was established here, many children came to enrol. After enrolment, it was the time to hire teachers. Nader Mousavi says: “we made an announcement and many teachers, all of whom were immigrants and had been able to study in Iran, came here. We could give them a small salary, but that was good. We were also compatriots and we got together and It was good for us feeling less homesick here, we understood each other and we had the same problems, apart from that made us do a good deed and it was a great encouragement to love the students. Years later, many of the students who started to study at Farhang, were able to continue their education and finally returned here to teach, that’s why I say this is our second home where all immigrants love.

A few short narratives of important people in Farhang

42 year old Nader from Mazar-e-Sharif
Nader Mousavi is one of the founders. He emigrated from Mazar-e-Sharif to Iran when he was only 9 years old. However, he still keeps the Dari accent when he speaks. Although he immigrated due to the terror of war and the Taliban, he has not forgotten his city and country after years. He has fond memories of his childhood. He says that they were the first generation of immigrants who immigrated to neighbouring countries, and when we came to Bandar Abbas, there were very few immigrants. My father after one or two month of pursuit could enrol us in a governmental school. At that time, they were not very strict because there were few immigrants and they might not be focused. That is why I studied with Iranian children. Of course, her sisters could not study because of the problems they had at that time. Nader received his master
degree from the University of Tehran and emigrated to Tehran after his father’s death. He is now in charge of educating those who do not have many opportunities in Iran because of the many hardships he has endured since he was a child and he tries to educate them well. He says that the most important thing for us to educate the children and grow them up, free from racism national, ethnic or religious and believing that humanism is the most important and greatest thing to exist for everyone, Nader continues: “Each of the children in this school have their own story, a story that starts with how they migrated and continues with their peak and trough and problems in life but Life goes on in this school. with all the bitterness and the deaths they have witnessed, and with all the injuries that they are exposed to, they are happy with a school where it is like taking a break from the hardships for them. Nader says the most important point about this school is that the children are respected here. They have been humiliated enough in their lives and it should be a new window to a new life for them, a window that gives them hope to love the life.

Farhang school students
He goes from one class to another. He is one of the naughty ones. The only thing he says is that he immigrated 2 months ago to Iran. He is seven years old and is studying in the first grade. One of his friends calls him. Erfan is an only child and fortunately he does not work. He does not give us more information. He reluctantly stands in front of the camera and smiles. Then he goes up the stairs. He is probably not used to Iran yet and is not sociable, but like All kids, loves to play and run. Maryam is another student in the second grade. She immigrated three years ago. Her father is a tailor. She also helps her parents. She has two younger sisters who are not in the school age and are at home. The children are not very talkative, they laugh more, and as if they are ashamed of the camera, they quickly hide behind their friends. Maryam does not talk about Iran either. Her geographical world in her eight-year-old days is as big as this school where she and her classmates pass their time until noon, in. Classmates who have a lot in common with her. Of course, Bahareh is the same, but she is a little different from others. Her eyes are blue and big. These eyes distinguish her from other Afghans with almond eyes. She is in second grade and does not work. She was born in Tehran, but She inherited the illegal immigration from her parents so she has to study here. She can not enrol in a governmental school. Of course, it does not matter much to her. She does not know what the difference is between her school and others. The children here are satisfied. They understand each other very well. They are on the same level and no one is superior to the other. Half of the children are labour children so there is no reason to keep their lives as a secret. They have all tasted the war. Maybe that’s why when we ask them the cliché question about what you would like to do in the future. Their answer is just a smile. They don’t have the slightest idea of ​​the future. They do not know where they are going after school so they do not think about it. Who knows, maybe having a good job in Iran is an unattainable dream in their minds.

Returning to Iran from Britain
Her daughter’s hand is in hers and she is wearing a hijab, talking to other mothers and she is smiling. her daughter looks alike her with a kind face, popped cheeks and the eyes which show they are from Afghanistan. She is smiling as she doesn’t let go of her mother’s hand. but Zahra and her daughter have a strange story, strange because they return to Iran after living in England for 10 years and chose this place to live. Zahra was born in Iran, but her parents are Afghans. They immigrated legally many years ago because of the war. she studied here. Zahra’s story becomes strange at this point. She was a teacher for a year in Farhang school until she got married and emigrated to England with her husband, who is also Afghan. Zahra speaks Iranian accent fluently, and if it was not because of her face you would never have realized that she is not Iranian. She tells us the story about her return to Iran. Islam was more important than anything for us, but the situation was a bit difficult in Britain. My daughter and son were born there, but the different lifestyle we had caused them difficulties and hardships. My daughter also went to school there, but she was a vegetarian and found herself separated from the other children and also I was separated from my parents, and this made life difficult for me in England. That’s why after 10 years and despite the good facilities that existed, we decided to return to Iran. My daughter does not know Persian well at the moment and speaks English, but she feels more comfortable here and has made many friends. And since we returned to Iran in the middle of the academic year, I have currently enrolled her in Farhang school till she can enrol in a governmental school next year. These days, all four of us feel better, being in Iran. My son is five years old and I know He also prefers living in Iran to Britain.

Education is everyone’s right, however these 115 students are deprived of their right.