A fascinating visit to the press exhibition 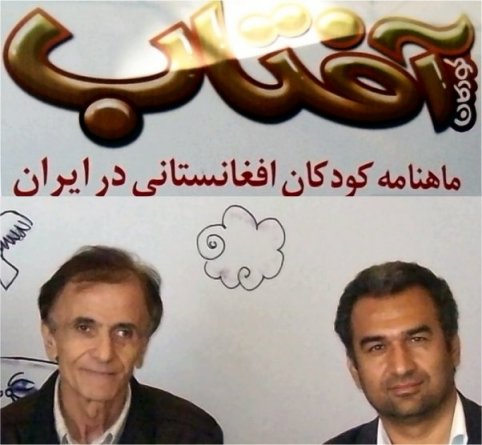 Ruznamak: A fascinating visit to the press exhibition; booth of Kudakan_e Aftab (Children of the Sun)monthly magazine, On Wednesday, 20 azar 1394,(November 11, 2015), Hamideh Khajavi Raad, a member of the editorial board of Ruznamak Magazine, visited the press exhibition in Tehran. According to her reports and the details of which will be published in that magazine, she was attracted by some cases. One of these cases is her visit to the booth of Kudakan_e Aftab (Children of the Sun)monthly magazine, under the management of Mr Nader Mousavi. She wrote that at the same time with this meeting, Mr. Esmail Abbasi (an old journalist who was a news editor in the Ettela’at newspaper before the Islamic revolution of Iran and a member of the editorial board of this newspaper after the revolution and one of the editors and writers of Hamshahri newspaper since 1371(1993) till two years ago) was there talking to Mr. Musavi about the monthly magazine. Mr. Abbasi is also a well-known cartoonist. Koodakan_e Aftab monthly magazine, as announced on its cover; It is a magazine for Persian-speaking teenagers in all over the world. Looking through The magazine’s content, whose 40-year-old editor is a sociologist born in Balkh (Afghanistan), shows that it has taken a completely new approach. Preparing teenagers for a better progress to live a happier life by allegorizing through writing about biographies of successful people, to prepare teenagers from the same ages to have faith & be determined for their futures and teach them how to plan for achieving to the goals. One of the examples is the article about biography of Ms. Nesa Mohammadi published in the magazine on Ordibehesht 1394 (May 2015). this article is about her studies in Mashhad and Tehran, which was not without problems, her admission to Golestan University of Medical Sciences and obtaining a bachelor’s degree in midwifery. Her practical career for two years And her postgraduate studies and etc. Later, while working at Kabul hospital, she became a university lecturer there. These efforts were not easy, but she did not lose hope and worked hard for her goals. She is 30 years old now. Another example is Abdul Ahad Momand, an Afghan astronaut who was a passenger on the Mir spacecraft for some days. This magazine is full of photos of student teenagers, cartoons, paintings and advices in journalistic (indirect) language. The magazine appears to be targeting mostly Afghan teenagers, especially those living in Iran.

A fascinating visit to the press exhibition-pdf